Aggregate house prices rose by a bit under 2% for the five major cities in 2020. This was the fourth consecutive year that annual house prices growth had been under 5%. That might sound disappointing but last year’s performance was outstanding given the weak economy. Much of the rise in prices happened in the second half of the year. House prices rose the most in Adelaide and Brisbane. They fell in Melbourne, and rose only modestly in Sydney.

The main driver of the better than expected house price performance was the power of very low interest rates. Easier access to finance helped. The better than expected economy, strong Government support for household incomes (JobKeeper) and improving housing affordability played their parts. Consumer surveys indicated demand for housing rose in most states as optimism about the economy improved, and ran ahead of the stock of houses for sale. Houses in the suburbs and regions were in greater demand than inner-city units.

My view is that house prices will rise across Australia by 7-8% in 2021, before slowing to 3-4% growth in 2022. Very low interest rates, easy lending standards and an improving economy are the positives. But higher prices means reduced affordability. Higher prices will also mean more supply coming on to the market. And combined with increased supply of new homes (turbo boosted by the HomeBuilder program) and modest demand (due to lower population growth) the supply-demand balance will act to moderate price growth moving into 2022. The outlook will differ by region and property type. 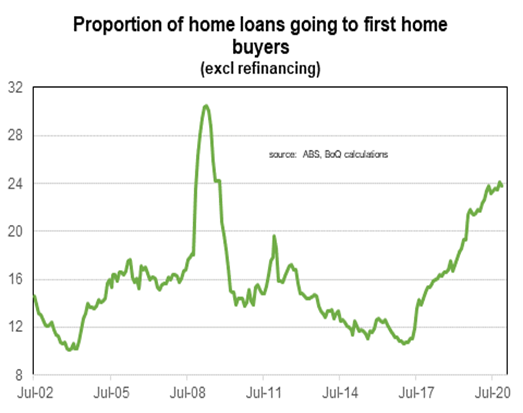