“So do you see what I see

Do you see what I see

Do you see what I see

Do you see what I see”

The Hunters and Collectors are one of my favourite bands. An Australian Music Hall of Fame group, they pumped out some of the most iconic songs in Australian rock history in the 1980s and 1990s. ‘Throw your arms around me’, ‘When the River Runs dry’ and ‘Holy Grail’ were all big hits back in the day, and all still sound just as good today (at least to my ears). While ‘Do you see what I see’ did not get the same acclaim as some of the Hunters’ other songs (only reaching number 33 on the ARIA charts), it had one important positive feature: the chorus is very easy to remember!

There is an element of ‘Do you see what I see’ when doing economic analysis. The official view of the nation’s economic performance is provided by the ABS when they release the GDP numbers. And in March they confirmed what most knew;  the Australian economy slowed in the second half of last year. The reasons are well known. Modest growth in pay packets meant modest growth in consumer spending. A turnaround in the fortunes of the (residential) construction sector is impacting not only that sector but key suppliers (notably manufacturer’s) as well as ‘customer’ industries (such as household good retailors). The impact of the drought has (unfortunately) made its presence felt. Bad weather crimped exports (which should be temporary).

Conceptually the GDP numbers provide the most comprehensive picture of the Australian economy. And over time they do. But because of how much information is collected and calculated, the GDP data are released with a long lag (about 10 weeks). And they can be subject to substantial revision.

So it is always good to get a different view on how the economy is performing by looking at other information. The RBA Deputy Governor (Guy Debelle) made a similar point recently when talking about looking at the Australian economy through different ‘lens’. One such lens it to look at other economic data such as imports. Strong import growth typically goes hand-in-hand with strong spending in the economy. And the growth of imports was robust until early 2018, but slowed as last year progressed to currently be a bit below average. But economic growth is not the only factor that impacts imports. The currency matters, and the weakening of the $A over last year made imports less attractive. Import growth also tends to be more heavily influenced by capex spending than overall spending in the economy. So the slowing of import growth may also have reflected the emerging weakness in residential construction.

The most widely watched monthly indicator of economic performance is the job numbers. Jobs growth gets a lot of headlines but can be distorted by whether the jobs are full-time or part-time. Looking at the growth in hours worked overcomes that problem. After rising very strongly in the first half of 2018, growth in the hours worked also moderated and is now back to around its long-term average. An alternative ‘lens’ is that instead of looking at numbers in spreadsheets is to ask firms and consumers about what they are seeing. A number of surveys have been established to do exactly that, some with better track records of getting a good economic view than others. Often the reporting of the surveys is about changes in firms/consumers’ confidence levels. While not unimportant (it influences investment decisions), confidence can be knocked around by short-term noise (elections, stock markets). So the better indicators (in my view) are when firms/consumers are asked about their own finances and spending.

Currently consumers indicate that their own budgets are in reasonable nick. Consumers are happy enough with the jobs market but are not tempted to do a lot of shopping (because of low wages growth). And this is probably the reason consumers have generally been cautious since the GFC. There have been bigger swings in firms’ views. In the first half of last year firms though that business conditions were as rosy as any time post-GFC. Views turned less sanguine in H2 (although there have been signs of stabilization in the early part of this year).

In Australia, the difference in yields has narrowed over the past year with 10-year interest rates declining by more than the 2-year interest rates. The difference in yields is above the level that historically have signalled the possibility of an economic recessions (and is consistent with an outlook of moderate economic growth). In any event, while the yield curve in the US has had a decent track record of forecasting the economic outlook its record in Australia has been a bit more spotty. This is because Australian long-end interest rates are less influenced by investor views on domestic developments and more heavily influenced by shifts in US yields.

Another financial indicator used to gauge investors’ economic views is changes in credit spreads. Credit spreads is the difference in the interest rate corporates need to pay to borrow relative to that paid by the federal government. The additional interest rate is necessary to compensate investors for the greater risk that a firm may default. Changes in the spread are influenced by views on the economic outlook (there are more likely to be defaults during a recession). One such credit spread is the credit default swap (CDS) for Australian major banks’ (a measure of investors’ views of the creditworthiness of the major banks). Major banks’ CDS after hitting a very low level in 2017 rose notably in the second half of last year as investors became more worried about the domestic and global economy. The CDS has declined this year, and is now back trading around the 2015 levels when the domestic economy was performing at around ‘trend’. So it does not matter which lens we use, GDP numbers, monthly economic data, consumer and business surveys or the financial markets. We essentially get the same economic view. The economy has slowed from doing well in the first half of last year, to doing just Ok. At the same time the ABS recently told us that inflation is comfortably below the RBA’s 2-3% target, and if anything appears to be declining. And the low inflation message is consistent with that delivered by consumers, firms and the financial markets.

Headline CPI (over the year % change) 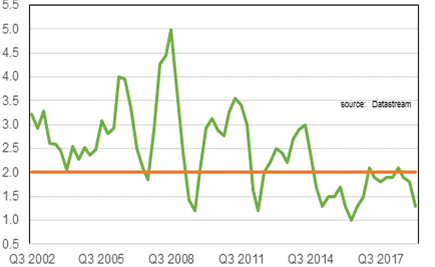 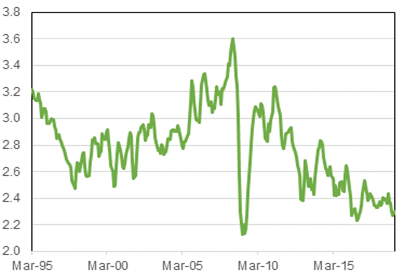 The big picture is that we need to be do better than having an Ok economy in order to get the unemployment rate down and wages growth (and inflation) up. The RBA has been hopeful that Australia will return back to scaling loftier economic growth heights. There have been better signs (particularly globally). But that combination of an average economy and too-low inflation means that the RBA will have to lend a helping hand (in the form of lower interest rate). Financial markets have been of that view for some time (at the time of writing investors’ have priced one rate cut by Q3, with a second fully priced by Q1 2020). Economists are now in agreement, with a 1% cash rate (half percentage point below the current level) the popular forecast for the end of 2019. Around one-third of analysts expect the cash rate to still be 1.5% by the end of this year.

There is a bigger disagreement about timing (some economists look for a move in May, others expect August). If the RBA does not move in May they are likely to signal an ‘easing bias’ (ie, the next move in the cash rate is likely to be down).

Economist Views On Level Of Australian Cash Rate (no of respondents)