For the first time for a long while financial markets were action stations for a RBA meeting. Sure investors have been expecting rate changes over the past couple of years. First the burst of stronger economic growth meant financial markets thought that the next cash rate move would be up. Then that moved to the next move would be down as the domestic and global economy slowed over the course of H2 last year. But what really got investors thinking that a rate cut might be imminent was a surprisingly weak Q1 inflation number. In the event investors’ have had to stand down, with interest rates remaining unchanged at the May meeting. But the RBA also made it clear they have a bias to ease. Below is a summary of the RBA views on the economy and financial markets following their February 2019 Monetary Policy discussion and how that compared with their views following their latest meeting.

The global economy grew above trend in 2018, although it slowed in the second half of the year. Unemployment rates in most advanced economies are low. The outlook for global growth remains reasonable, although downside risks have increased. The trade tensions are affecting global trade and some investment decisions. Growth in the Chinese economy has continued to slow, with the authorities easing policy while continuing to pay close attention to the risks in the financial sector. Globally, headline inflation rates have moved lower due to the decline in oil prices, although core inflation has picked up in a number of economies.

The outlook for the global economy remains reasonable, although the risks are tilted to the downside. Growth in international trade has declined and investment intentions have softened in a number of countries. In China, the authorities have taken steps to support the economy, while addressing risks in the financial system. In most advanced economies, inflation remains subdued, unemployment rates are low and wages growth has picked up.

At the start of the year investors’ were worried about the global economy entering recession. A few months into the year those concerns have been reduced. The economic data in the US and China has improved. Importantly, the Federal Reserve is no longer seen as raising rates and the Chinese Government have both reduced interest rates and cut taxes. True Europe is struggling, but should improve if the US and China improve. But at this stage a better global economy is only a forecast. 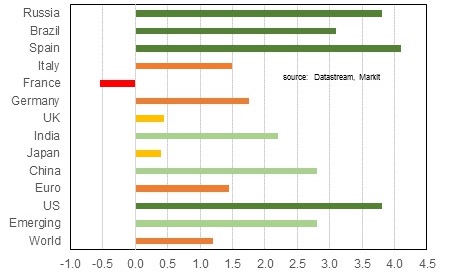 Economist Estimation of Probability of Recession US Economy Next Year

Financial Markets:  Happier with risk, but not happier about the economy

Financial conditions in the advanced economies tightened in late 2018, but remain accommodative. Equity prices declined and credit spreads increased, but these moves have since been partly reversed. Market participants no longer expect a further tightening of monetary policy in the United States. Government bond yields have declined in most countries, including Australia.

Financial markets have provided both good and bad news this year. The good news is that appetite for risk is back, helping equity markets rise and corporate bond spreads to fall. The bad news is that financial markets are increasingly pricing in modest global growth (hence expectations about rate cuts in most countries) and inflation being too low. If economic growth is bad then this could create problems for the corporate bond market and equities. But if growth is good, interest rates will rise and this could cause problems for market valuations. The story of 2019 will be which of these paths financial markets follow. 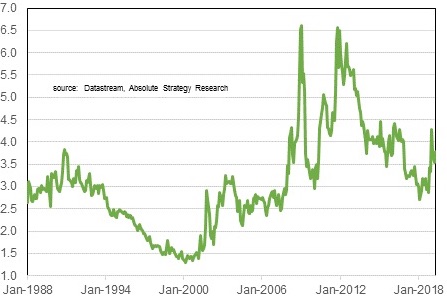 Exchange Rate: When lower is better

The Australian dollar has remained within the narrow range of recent times. The terms of trade have increased over the past couple of years, but are expected to decline over time.

The Australian dollar is at the low end of its narrow range of recent times.

The $A has fallen over recent months reflecting expectations of RBA rate cuts. A weaker currency is one of the ways that monetary policy works to power the economy. Financial markets are pricing in half percentage point reduction in the cash rate. For the $A to move substantially lower will require either financial markets to price in even more easing by the RBA, or to push interest rates in the US higher.

The $A and BOQ of Fair Value Range 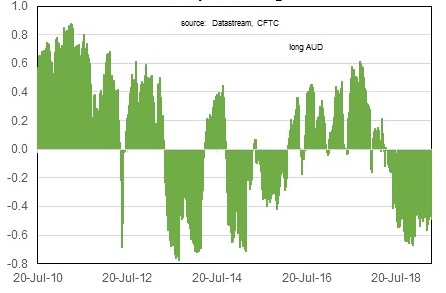 Domestic Economy: Ok, but not great

The central scenario is for the Australian economy to grow by around 3 per cent this year and by a little less in 2020 due to slower growth in exports of resources. The growth outlook is being supported by rising business investment and higher levels of spending on public infrastructure. As is the case globally, some downside risks have increased. GDP growth in the September quarter was weaker than expected. This was largely due to slow growth in household consumption and income, although the consumption data have been volatile and subject to revision over recent quarters. Growth in household income has been low over recent years, but is expected to pick up and support household spending. The main domestic uncertainty remains around the outlook for household spending and the effect of falling housing prices in some cities.

The labour market remains strong, with the unemployment rate at 5 per cent. A further decline in the unemployment rate to 4¾ per cent is expected over the next couple of years. The vacancy rate is high and there are reports of skills shortages in some areas. The stronger labour market has led to some pick-up in wages growth, which is a welcome development. The improvement in the labour market should see some further lift in wages growth over time, although this is still expected to be a gradual process.

The central scenario is for the Australian economy to grow by around 2¾ per cent in 2019 and 2020. This outlook is supported by increased investment in infrastructure and a pick-up in activity in the resources sector, partly in response to an increase in the prices of Australia's exports. The main domestic uncertainty continues to be the outlook for household consumption, which is being affected by a protracted period of low income growth and declining housing prices. Some pick-up in growth in household disposable income is expected and this should support consumption.

The Australian labour market remains strong. There has been a significant increase in employment, the vacancy rate remains high and there are reports of skills shortages in some areas. Despite these positive developments, there has been little further progress in reducing unemployment over the past six months. The unemployment rate has been broadly steady at around 5 per cent over this time and is expected to remain around this level over the next year or so, before declining a little to 4¾ per cent in 2021. The strong employment growth over the past year or so has led to some pick-up in wages growth, which is a welcome development. Some further lift in wages growth is expected, although this is likely to be a gradual process. 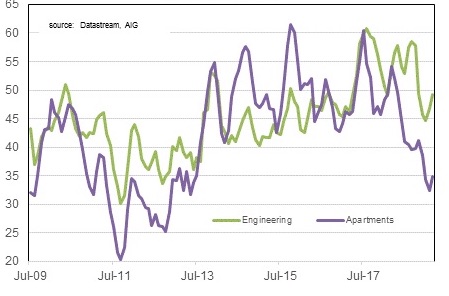 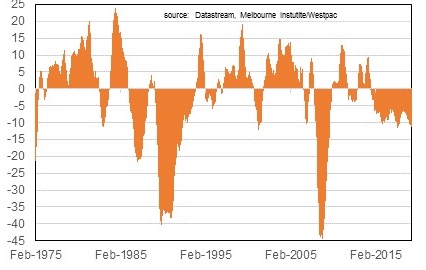 Inflation: Expected to be lower for longer

The inflation data for the March quarter were noticeably lower than expected and suggest subdued inflationary pressures across much of the economy. Over the year, inflation was 1.3 per cent and, in underlying terms, was 1.6 per cent. Lower housing-related costs and a range of policy decisions affecting administered prices both contributed to this outcome. Looking forward, inflation is expected to pick up, but to do so only gradually. The central scenario is for underlying inflation to be 1¾ per cent this year, 2 per cent in 2020 and a little higher after that. In headline terms, inflation is expected to be around 2 per cent this year, boosted by the recent increase in petrol prices.

The Q1 CPI was disappointingly low. Both firms and households are saying that price growth has been very modest. The RBA puts the weak Q1 number down to the housing sector and price reductions in regulated industries (eg, electricity). At some point, the moderation of prices in the regulated sector will come to an end. Having a forecast that inflation will just enter the bottom of the inflation target next year is very modest progress. Unless better progress is made lower interest rates are likely.

Headline CPI (over the year % change) 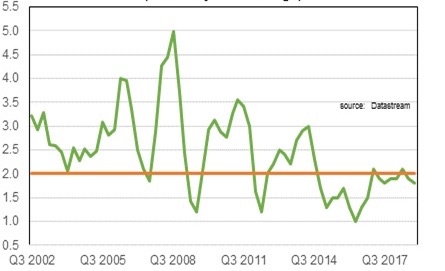 The housing markets in Sydney and Melbourne are going through a period of adjustment, after an earlier large run-up in prices. Conditions have weakened further in both markets and rent inflation remains low. Credit conditions for some borrowers are tighter than they have been. At the same time, the demand for credit by investors in the housing market has slowed noticeably as the dynamics of the housing market have changed. Growth in credit extended to owner-occupiers has eased to an annualised pace of 5½ per cent. Mortgage rates remain low and there is strong competition for borrowers of high credit quality.

The adjustment in established housing markets is continuing, after the earlier large run-up in prices in some cities. Conditions remain soft and rent inflation remains low. Credit conditions for some borrowers have tightened over the past year or so. At the same time, the demand for credit by investors in the housing market has slowed noticeably as the dynamics of the housing market have changed. Growth in credit extended to owner-occupiers has eased over the past year. Mortgage rates remain low and there is strong competition for borrowers of high credit quality.

RBA’s view on housing and lending standards remains unchanged from three months ago. Interesting given that there have been some better signs (the decline housing prices has decelerated, auction clearance rates have risen). The excess of supply of housing will continue to weigh on prices for a while yet.

Interest Rates: Another year of inactivity

The Statement noted that, “the Board will be paying close attention to developments in the labour market at its upcoming meetings”. My read is that this is the RBA saying that unless things improve we are reducing interest rates. On the day the financial markets (rightly) reacted by pushing out their view when rate cuts will occur (and modestly raised the rate outlook). At the time of writing one rate cut is priced by end Q3 with a second largely priced by mid next year. 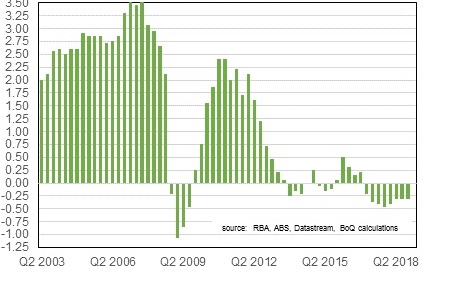 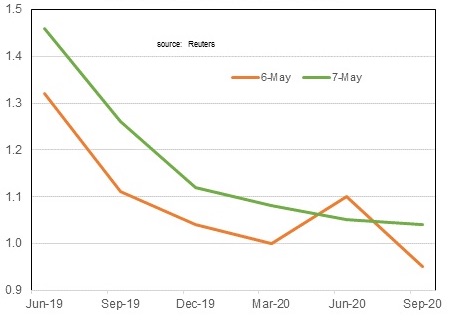 “Full speed ahead” sang Ringo Starr in his rendition of Yellow Submarine. And full speed ahead is certainly what the RBA would like to see from the domestic economy. Unfortunately over the past year the economy has been shifting down a gear, and not up. Fiscal policy will provide a push, but a lower cash is also likely to be required. The RBA did not deliver today. But a monetary policy nudge is likely to be necessary to get the economy moving at the pace that would get Ringo Starr singing.