• Tasmania had the strongest economy in the 2019 financial year;

• But over the past decade it is WA that has taken the economic growth crown;

• Much of the decline in household saving has happened in Victoria;

Countdown was an iconic Australian music program of the 1970/80s. It was one of the first shows in the world to regularly use music videos. One of the features was that at the end of each program it finished with a top ten hits (counting back from number 10). The interest was which song would be ‘top of the pops’.

The Tasmanian economy was clearly the top of the economic state pops in 2018-19.  And the ‘official’ numbers were consistent with many other indicators. Business sentiment has been strongest in Tasmania. It is the only state where the number of residential building approvals is still growing. My discussions this year with Hobart clients had a more optimistic hue than those with clients in other states.

While Tassie led the way, Victoria still did pretty well. NSW was slowing. WA bought up the rear, still dealing with the end of the mining boom.

This was the first year that Tassie has been ‘top of the pops’ since the data began to be compiled in 1991. SA has also only been the strongest state once (2001). A lot of focus has been on the strength of the NSW and Victorian economies. But those states outperformance has been a recent phenomenon (2015-17, although Victoria also topped the charts in 1998). Ironically the two states that usually lead the way (Queensland and WA) were also the two that grew the slowest in the 2019 financial year.

Economic performance can jump around year-to-year. But improved living standards requires sustained good rates of economic growth. Over the past decade WA had the strongest economy, with the mining-boom powered early years more than offsetting the weakness of recent years.

Historically WA has been jostling with Queensland as having the strongest growth rates. But over the past decade Queensland’s performance has been closer to average. Due to the relative size of their economies growth in NSW and Victoria typically drives the national average. 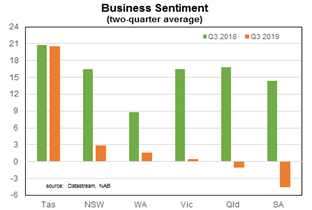 The decade averages for disposable income growth paints a different picture to that for the economy-wide numbers. Queensland and WA have been strong, but not that much stronger than for the other states. A key reason is the fiscal equalisation process in Australia where taxes in some states (notably NSW, Victoria and currently WA) are used to subsidise government spending in other states. 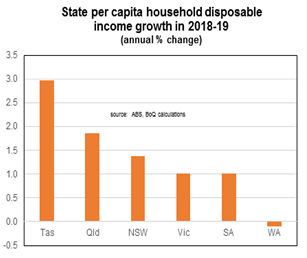 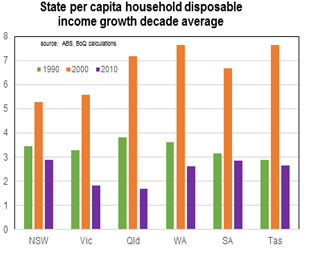 Interestingly there has been a significant difference in saving patterns between states over recent years. In most states the gross saving ratio (the proportion of gross disposable incomes saved) is above 10% (and above 20% in WA). But the saving ratio is currently negative in Victoria, maybe a result of a strong economy giving households the confidence to spend. Nationally, the household saving ratio has declined by around three percentage points over the past five years. This has been a result of the fall of saving in Victoria (and to a less extent in NSW and WA), partly offset by higher saving in SA and Tasmania. 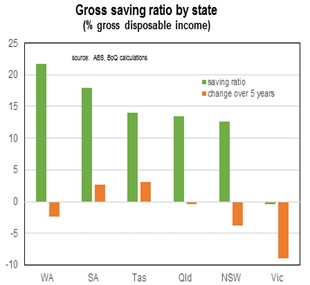 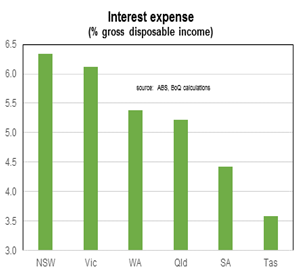 The current economic weighting of the states within the national economy is:

Over the past decade strong population growth has driven Victoria to become a bigger part of the national economy. The end of the mining construction boom has seen Queensland (and to less extent WA) have a smaller share.

Strong population growth and an aging population has meant that the construction and health sectors are important to most state economies. But history, geography and climate means industry composition differs between states. Mining is big in WA and Queensland, finance in NSW and Victoria. The top 3 industries broadly account for the same proportion of the economy across most states (a bit under 30%). The exception is WA where mining is by far the largest industry.

Industry composition influences state economic growth potential. For example, WA’s relatively strong economic performance over the past three decades is influenced by the outsized contribution of mining. Mining is also important for QLD, less so for NSW and Victoria. One reason is that in NSW service sectors (including real estate) make a bigger contribution reflecting Sydney’s status as a global city.

Similar factors drive the bigger contribution of service sectors to the Victorian economy. History also means that manufacturing is a bigger part of the Victorian economy. Service sectors are less important for Queensland and WA (partly reflecting the bigger size of their mining sectors). Agriculture makes a bigger contribution to the SA and Tasmania.

The performance of individuals industries has also varied between states. For example, weather conditions might favour some states’ agricultural sectors over others. NSW, Victoria and WA were the states that contained the largest number of industries that have grown the strongest over the past decade. In WA that was mainly the direct and indirect impacts of the strong performance of the mining industry. In NSW and Victoria it reflected the large rise in population over the past decade.

All up, Tasmania had a very good 2019 financial year. And momentum suggests another good year is ahead for Tassie. But it is Queensland and WA that have proven to be the consistent state economic chart toppers over the past three decades. We will have to see whether that relative performance continues over the coming decade.